Canadian Housing Day: Tenants Move in in front of Prime ministers’offices in Ottawa and Saint-Félicien

Ottawa, November 21st 2014 – It’s by moving bed, stove, fridge, sofa and other furniture in front of Prime Minister of Canada, Stephen Harper’s office in Ottawa, this afternoon, that a few hundred members of the Front d’action populaire en réaménagement urbain (FRAPRU) have chosen to remember him of his responsibilities regarding the right to housing.

The event is organized in the context of the Canadian Housing Day. A similar action take place at the same time before Premier of Quebec, Philippe Couillard’s constituency office, in Saint-Félicien (Lac-Saint-Jean). Activities are also held in other cities of Canada like Toronto, Thunder Bay, Winnipeg, Edmonton and Whitehouse. 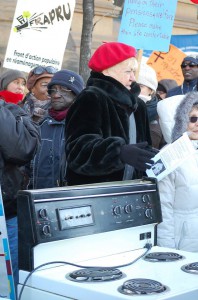 According to François Saillant, spokesperso for the FRAPRU, « Stephen Harper’s Government violates the right to housing by devoting only crumbs to the fight against housing problems, while refusing to renew the funding provided by Ottawa for decades to existing social housing”.

The FRAPRU considers that the 250 million $ per year the Government spends for its investments in affordable housing in all of Canada are ridiculous, given the scale of needs. Yesterday, Canada Mortgage and Housing Corporation (CMHC) has published a review that evaluates to 989 385 the number of tenants households who are in core housing need in Canada, because they live in unacceptable housing conditions. In Quebec, 270 340 tenants household are in this situation and in Ontario, 377 025.

The organization otherwise accuses Stephen Harper’s Government to turn a deaf ear on the pressing demands to renew the federal grants paid, for decades, to nearly 566,000 existing social housing units in Canada. According to the Canada Mortgage and Housing Corporation (CMHC) figures, 25,000 social housing will no longer receive federal subsidies in 2015, while 24,000 others will lose them in 2016. The end of this support will result by major increases in rent, which will be disastrous, not only for the tenants who currently live in these units, but also for households that have an urgent need to access affordable housing.

« In 2016, the federal Government will save more with the end of its long term subsidies to existing social housing than what he allocates to the realization of new housing. And that is shameful, » exclaims François Saillant.

The FRAPRU demands that Ottawa invest 2 billion $ per year in the realization of new social housing, while maintaining the 1.7 billion $ currently paid to existing units. « The federal Government has ample means, and has entered a period of budgetary surplus which it has begun to squander, by allowing income-splitting for more affluent families, which deprived Ottawa of 2.4 billion $ in 2014-2015.