The Canadian Housing Strategy should not be a smoke screen! 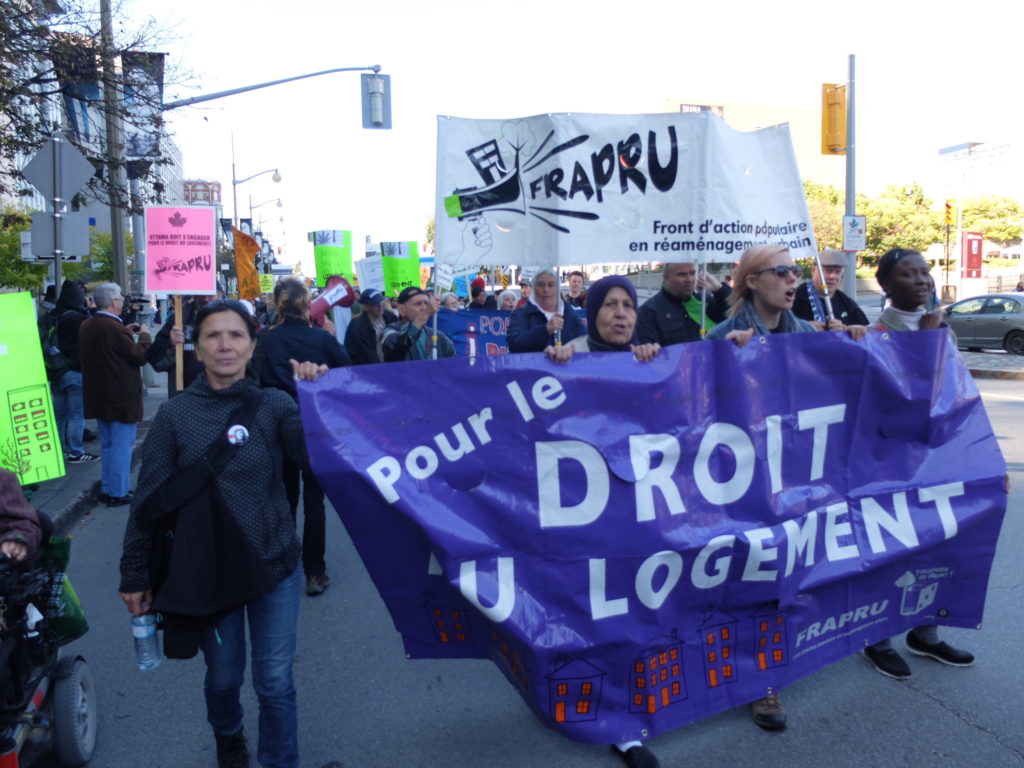 Ottawa, October 12th, 2017 – A few hundred people coming from several regions of Quebec, as well as from Ontario, protested this afternoon on Parliament Hill, in Ottawa. The event is organized by the Front d’action populaire en réaménagement urbain (FRAPRU) and supported by the Ontario Coalition Against Poverty (OCAP). A few weeks before the Canadian Housing Strategy is presented, they are demanding that the Trudeau government prioritize social housing to seriously address the housing crisis that affects thousands across the country.

FRAPRU and OCAP fear that the Canadian strategy will offer no new commitments than those already announced in the last Morneau budget, despite the requests made throughout the consultations carried out last year by Minister Jean-Yves Duclos. “For the moment, the 11.2 billion $ planned for the Canadian Housing Strategy are not proportionate to the needs; this funding is scheduled on much too long a period and does not prioritize low-income households”, explains Véronique Laflamme, FRAPRU’s spokesperson. “To be taken seriously, the Liberals must in fact spend the $11.2 billion within the next two years – the time they have left before the next election. The money must be directed to fixing and building social housing, restoring federal housing subsidies, and addressing the crisis of homelessness”, adds Yogi Acharya, OCAP’s spokesperson.

According to official numbers, 989 385 tenant households in Canada have core housing needs, living in a dwelling that is either too small, unsanitary or too expensive. FRAPRU fears that some 365 000 households living in social housing built before 1994 will join their ranks when the units they rent lose their federal long-term subsidy agreements, while several buildings are also in dire need of major repairs. FRAPRU finds it scandalous that the Trudeau Government ignores the daily tragedies experienced by all these people.

According to FRAPRU, the federal withdrawal from the social housing sector is one of the main causes of the current crisis of affordable housing found across the country. “Nearly 25 years without significant investments in social housing has done substantial damage and Ottawa needs to invest massively to start to resolve the issue”, says Véronique Laflamme.

FRAPRU also demands that the Canadian Government formally recognize the right to housing, to facilitate the exercise of remedies by poorly-housed tenants when their rights are scorned. “On the private market, many low-income households live in senseless insanitary conditions and suffer abusive rent increases. The Federal Government cannot abandon these tenants”, argues Mrs. Laflamme.

As a reminder, the protesters left behind giant portraits of poorly-housed tenants in front of the offices of the Prime Minister, coming out of a smoke screen. These tenants testified during the Tour for the Right to Housing that FRAPRU led this fall throughout Quebec.

FRAPRU also promises to react publicly as soon as the Canadian Housing Strategy is made public, planned for November 22nd on Canadian Housing Day. Various events will be organized in several parts of Canada, following a call to action by OCAP, FRAPRU, and of the Carnegie Community Action Project (CCAP) from Vancouver.

A French version of this release is also available